For his academic day release in FY1, Donald spent time with the Oxford Vaccine Group (OVG), learning some basic lab techniques (he had not done any lab research previously), and attending paediatric infectious disease ward rounds, clinics and seminars. He learnt a lot from this, although, despite all of the brilliant opportunities offered by the OVG, he was not very well suited to lab research!

This was where the flexibility and generous time allocation of the Oxford AFP came into its own, as Donald was able, whilst with the OVG, to meet other potential supervisors, and there was no issue in switching research groups for his larger research block in FY2.

Donald chose for this to work with Professor Mike English’s Oxford Health Systems Collaboration. He is one of several very senior Oxford academics who spend most of their time working overseas, as part of the Oxford Tropical Network. Donald’s project involved developing estimates of the newborn disease burden for Nairobi City County in collaboration with the Kenyan Medical Research Institute (KEMRI-Wellcome Trust). In the course of this he was lucky enough to travel to Nairobi (with funding from his AFP OUCAGS grant!) where he participated in working meetings with senior Kenyan clinicians and academics. Subsequently he presented the study data at several global health conferences in Oxford, and at the London School of Hygiene and Tropical Medicine. Donald and his colleagues are currently writing it up for publication. 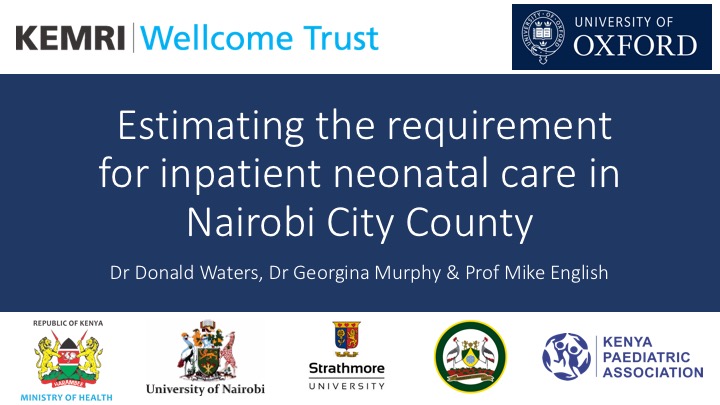 Your Career: The ASFP

Why Oxford? Our ASFP