Mitch is working in Prof Fergus Gleeson’s group at the Churchill Hospital. His main project is to investigate the use of hyperpolarised xenon magnetic resonance imaging (HPX-MRI), a novel non-radioactive gas contrast imaging technique, in a number of clinical applications.

In conventional MRI, the signal originates principally from the protons in tissue water molecules.  It is therefore not particularly useful in assessing the lungs, which are composed largely of air spaces rather than water.

Xenon is an inert, non-toxic noble gas that is naturally found in the atmosphere. Through a process known as spin exchange optical pumping, the gas gains enough magnetisation to evolve into a ‘hyperpolarised’ state, which would make it visible on MRI. This property enables pulmonary MRI in patients upon their inhalation of the hyperpolarised gas. It is capable of providing detailed functional information of the lungs, which is advantageous comparing to conventional thoracic imaging methods like high resolution CT (HRCT). Comparing to pulmonary function test, it can illustrate regional differences in lung function. Comparing to single photon emission CT (SPECT), HPX-MRI involves no ionising radiation.

Like oxygen, xenon is soluble in aqueous solutions; this property allows for dissolved phase imaging where through a phenomenon known as chemical shift, the alveoli-capillary gas transfer and diffusion capacity information can be obtained.

So far the group has conducted two studies examining the use of HPX-MRI to map the ventilation and diffusion in healthy and chronic obstructive pulmonary disease cohorts, respectively. They are currently looking at using dissolved phase HPX-MRI to detect regional functional pulmonary changes in patients undergoing radiation therapy to their chest, who are at a risk of developing radiation pneumonitis and later fibrosis (see figure).

Another application that they are interested in is using HPX-MRI to depict regional changes in ventilation and gas transfer in asthma patients before and after the administration of a short acting bronchodilator. This would allow them to use HPX-MRI as an intermediate surrogate outcome measure for asthma drug development.

Interstitial lung disease (ILD) is characterised by progressive scarring of the lung, leading to its irreversible loss of function over time. Its pathophysiology is thought to be due to the abnormal healing response to a minor but repeated lung injury.  In their third study, Mitch and his colleagues aim to use HPX-MRI to map pulmonary functional responses (ventilation and diffusion) to drugs therapy and quantify disease severity in ILD patients. 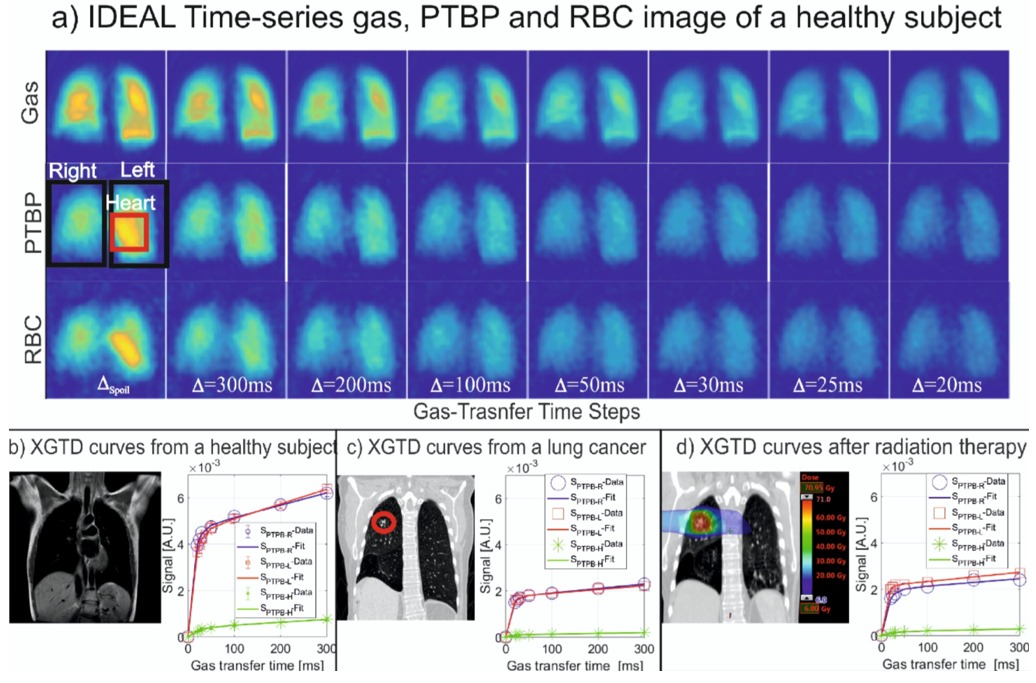 Dissolved-phase times series HPX-MRI imaging of a healthy participant, divided into three compartments (Gas, PTBP, RBC), is given in a). The gas transfer curves (XGTD) are plotted against time based on imaging signal intensity in the regions of interest, in this case, the left, right lungs and the heart. There is no statistical difference (p > 0.4) between the left and right lungs in the healthy participant in b). But the lung cancer patient in c) (primary malignancy circled in red) showed statistically different signals in the left and right lungs, demonstrating the sensitivity of HPX-MRI to gas exchange abnormality as a result of the cancer. Furthermore, the slope of the curve representing the right lung has reduced by 20-35% following radiation therapy (dose 60-75Gy, shown on a colour scale in d) to the area, which could represent a slower rate of diffusion into the PTBP compartment as a result of radiation. Why Oxford? Our ACFs